I would like a function that would show the most popular decks in 30 minutes on certain cups, for example 4500-4700.

It takes time to index battles, so showing results within the last 30 minutes won’t give you useful data.

Recall that we don’t have direct access to the battle database that Supercell does. Our battle data comes from users accessing their battle log and thus we would know what they have played. This means that data from “the last 30 minutes” will not be complete.

This is why the smallest time range we support is 1 day.

You can already search against trophy range. 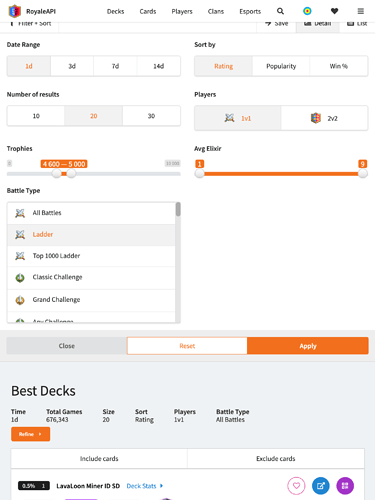 The trophy range slider does not show up unless you select Ladder as the battle type — because it is meaningless in other game modes — and also because by default the non-Ladder battles don’t include trophies of the players.

Our battle data comes from users accessing their battle log and thus we would know what they have played?and if they do not apply?

We know when they play — but did you not read what I just wrote?

Let’s use an analogy:

Say you want to know what your friends had done yesterday. And your friends can tell you when they have done something and when.

Say… your friend John went to the mall 15 minutes ago.

So theoretically speaking, if you talk to John right now, he could tell you what he had done 15 minutes ago. However, as you don’t talk to all of your friends continuously until you talk to them, it is meaningless to ask you to list what your friends have done in the last 30 minutes.

Because it depends on your having talked to your friends already.

Clear. It’s just that one day I thought that if this function was then I could take a counter deck.It’s a pity!