Hi, is this your main account? Or do you have others?

This is not my main account
I used to have a good account
（done 21years 20wins ，100CC，10GC and GT rank）（I’m sorry I deleted CR in China,So no screenshot）
But I did not apply at that time
Later, Chinese players were excluded because of national political problems
I have participated in some small third-party events（main in battlefy）,and have good performance,I just be seeded in MEST finals just now.
And has beaten several strong pro players（such as soloman,paradox,gunhwi,alphqqand so on）
Please rest assured of my strength
Thank you for your hard work 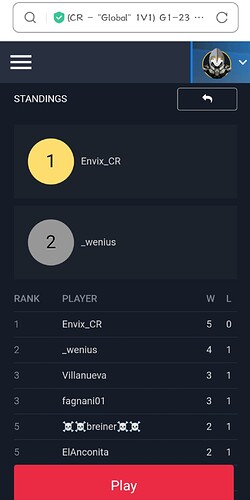 We can still validate information even if the an account was migrated to the Chinese server. Please let us know what your player tag was.

I deleted CR in China very early
Later, because I did not have a unified login method, so I lost my account , and I also forgot my tag
I only have a few screenshots
It from 2021
one is my main account,other one is in order to entertain time

Sorry I can’t find particularly complete screenshots, some from my album and some from some videos I posted bilibili

The purpose of sending these screenshots is to confirm that I do have a professional level. However, I did not invest much time due to academic problems, and just played some domestic folk competitions. However, I graduated and participated in some global but small competitions, so I wanted to apply for esports profile

And because of the top ladder of cr in China, there are some behaviors of buying and selling cups, and the tournament is the same, so I gave up early, and opened a new account of global service

Ok, sorry, in that case we cannot create an esports profile.

Sad response, is there any solution?

I’m afraid not, with the information we have available that’s the only option

A post was split to a new topic: [Dxdxk] Create esports profile

Sorry, this doesn’t change our stance.

A post was merged into an existing topic: [Dxdxk] Create esports profile