I really love the new deck builder feature you have implemented. It makes life much easier for a lot of previously annoying tasks (duel decks for example). However, I have encountered a small problem while working with the deck builder today. First, let me give you a bit of context.
I am part of the SSG Clan family where we do a inter-clan team tournament with 8 clans participating in total. Depending on the strenght of our opponents, I like to scout them via RoyaleAPI (looking at their decks, using match-up feature to find decks weak against most of their decks).
Deck builder would come in handy to share my “recommended decks” with the rest of the team.
So I created a deck list “Against Team XY” and would like to put in the decks I recommend. However, I can’t rename the decks I put in, even though I’d like to name the decks for example “vs. Player X”, “vs. Player Y”. This now means I need to create a deck list named “Against player X” instead of having all the deck within the same list, which is unfortunate since I’d now have to share 5 different deck lists instead of a single one, because I can’t rename the decks itself.

This now leads to my request/question: will you consider allowing to change deck names itself?

I wish you a very nice rest of your day,
Stay safe and keep being awesome!

Thanks for taking the time to write a feedback. Your suggestion is very reasonable and we can definitely look into it. The only thing is perhaps that you’re looking for not just the deck names in the Deck Builder, but you’re looking to write custom copy onto the Deck List themselves.

We are very conscious that we won’t have the modding power (time + resources) to moderate custom typed texts. We have had internal debates about whether to let users to type texts surrounding the decks, and are a bit stuck because of moderation issues. What if we allow you to group decks in the deck list with colors instead?

Ultimately, we just don’t want a bunch of pr0n texts on our site — because when we give people the power to write anything, all manners of bad / abusive/ hateful texts tend to come out with them, and it won’t really be possible to moderate them unless we hire a moderation team — which is realistically not something that we have the manpower for.

thanks for your quick response! Your reasoning makes a lot of sense, I didn’t consider the “moderation issues” you talked about. However, the color grouping sounds like a solution to me.

All I want is to be able to create groups of decks that is easily understood by the person I share the list with. This can work very well with colors, all I need is to communicate the color code to the people I share the list with, which is a good compromise in comparison to sending many different deck lists.

Many thanks for your answer,
Keep being awesome

Noted. We are adding some features to the Deck List soon. Would you be interested in participating in beta testing before we go live? It will have some of the features you are looking for.

Yes I’d love to test some new features! How can I take part in the beta?
Thanks again

Beta testing will happen on Discord. It’s not ready yet but when it is I will reach out. Are you on Twitter? Perhaps I could tag you there and let you know? Either way, I have marked you as a beta candidate on this post so I will come find you when something is available.

Thanks. I’ll ping you when the time comes. We don’t have a timeline for this yet. It could be in a week or a month. All depends on workload / priorities / when we think it’s ready for testing.

Gotcha, thanks for the responses today!

I thought of another thing that would benefit the deck lists. (TLDR at the bottom)
Since my initial question was about this topic too I thought I’d simply add my next suggestion via a response to this thread. Hopefully this was the right way instead of opening another topic.

Now if I want to play with my teammate, it would simplify the communication if there was some sort of numerical system. This would allow me to simply say “let’s play deck #7”, instead of:

If lists were allowed to have more than 20 decks and they had the color-code we talked about earlier, the numerical system wouldn’t be a crucial feature. However, sometimes there are benefits to have 2 seperate lists. For example if we have 20 2v2 decks, meaning 40 decks in one list, the colors I can use would rapidly deminish meaning I’d have to use 2 shades of red for example, which can also get confusing since it’s not clear what light red is vs. a light orange for example (to some users, maybe due to illness or the understanding of colors etc…). In this use-case (many decks that go together) having a numerical system makes it way easier to navigate the list for the people I share it with.

Hopefully my message wasn’t too long and complicated for my simple request,
Have a nice rest of your day,
pates 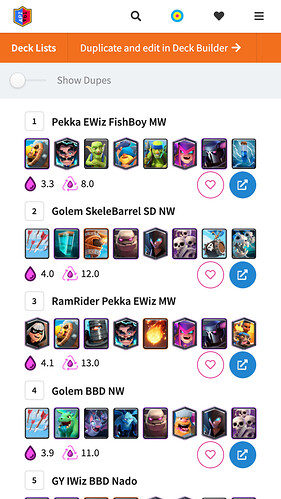 Thanks for your quick response.

Just to be sure, I want to ask a question concerning point 2 you made: Does “I have already added it for you” mean you:

However, I think you meant the first option and I just didn’t understand the meaning correctly.

Thanks for the clarification in advance,
pates

These are for the published lists. It’s not on your own edit lists because in your edit view you can drag things around and adding numbers there are in fact confusing. I have tested always putting numbers in lists and the result is mostly that you’ll get very confused why when you move item 4 into item 3, the numbers stay the same.

So I will not put it in the edit view, but only in the share view - i.e. when you share the list - you can play from that view also.

In case unclear this is that view:

Thank you for your response,

I didn’t understand it was for the shared lists with your first response. Your reasoning makes sense to me.
Thanks for implementing the numbers so rapidly, they will be very useful.

That should be it from me today, but incase I get any other ideas I’ll post them here,
pates