In the River Race page of each clan, the win rate in Royaleapi is calculated cumulatively for the whole week (Battle Day 1 to 4). 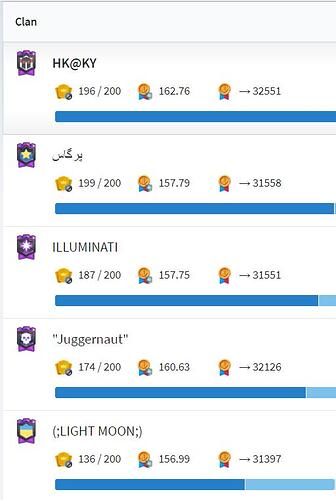 Here’s my suggestion. Is it possible that Royaleapi includes both win rate on daily basis and weekly basis so that both numbers are useful during non-Colosseum weeks and Colosseum weeks? Thank you very much!

Understand. Thank you very much!

Actually it seems that I misunderstood you. Regarding calculation method, our method gives a better estimation of your final result. So we use the whole week.

We have run tests for this and came to this conclusion. While I see that you might want to see daily win rates, for the majority of the clans that will lead to the wrong estimation of final scores.

There isn’t a place to add even more columns on the UI. Not to mention that it will confuse most of the users.

My first comment still applies though: we are waiting for supercell to separate battle days and training days so we don’t have all these convoluted methods to calculate projections. (There is a far better way but which cannot be done with current fields)

Understand that “There isn’t a place to add even more columns on the UI”. I just want to address that during non-Colosseum weeks, each clan needs to fight for the highest daily win rate. 1st position +3000 boat points, 2nd position +1800 boat points, 3rd +1000 boat points, and so on. The clan which accumulated 10000+ boat points clams the biggest clan war chest of the week!

If the strength of all 5 clans are quite close, winning on Day 1 does not guarantee winning on Day 2, 3 & 4. Looking at the accumulated win rate on the whole week does not have a better view on the separated daily results. For example, on a specific day, if our clan has win rate 174.2 (8 attacks remaining) and another clan has win rate 174.0 (12 attacks remaining), different clan war strategy can be implemented. We need to look at the actual boat points and implement the best strategy, like “Should we attack their boat defenses directly?” or “Just go straight to normal clan war battles”?

Of course, adding another daily win rate is not a MUST thing. All over the months and weeks, we use our calculator to do the math by ourselves. Thank you very much again for your second reply. Have a nice day!