As Leader, daily I use your site and manually calculate Medals per Battle fought for all 5 clans in our River Race, and communicate it to our clan. This gives us an idea of where we actually stand that day since CR doesn’t show battles fought. Can you include this Medals/Battle as a new column on your War-RiverRace tab in the standings?

Bonus - the Calc I do on Colosseum weeks is tougher - basically I add 200 Battles played for each Day that has passed to the current day’s Battles and devise that into the running cumulative Medal total. Thanks, you guys are great- put you in my creator tag as often as I remember to update it!

This is not possible because Supercell returns medals on battles days only but return war decks for all days — so we actually couldn’t calculate medals per battle.

We have asked for a change but it hasn’t been fixed by them.

I don’t know what this means. 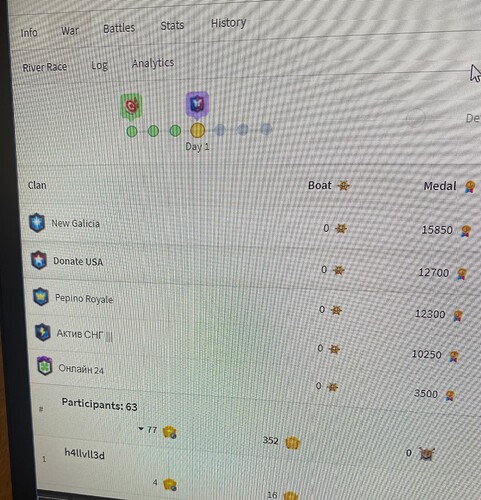 I use your data to do this Medals per Battle calculation, so not sure why you wouldn’t be able to add it. In the screenshot for the clan “Donate USA”, it would simply be their Medals (12700) divided by War Decks Used Today, aka Battles today (77)….164.9

As I have explained it, the data returned by Supercell is like this:

So hypothetically speaking, let‘s say there are two players:

Player A. Plays war decks every day, get perfect points on battle days

This calculation would suggest that Player B is better than Player A, but in fact they are equal.

But wait… Ok I see what you are saying… you want a clan medals / battle? If so then sure i guess…

In the 2nd war day, for example, you’ll not be able to distinguish between the amount of battles that happened in WarDay1 and Training Days. You’ll just have:

@alpe123 He is asking on a clan-level medals per battle, not player level. Read my follow up immediately above you

In the 2nd war day, for example, you’ll not be able to distinguish between the amount of battles that happened in WarDay1 and Training Days.

That is not true in the first 3 or 4 River Race weeks each season (but is true on the final Colosseum week). During a River Race, the medals reset each day. Its the boat progress that is cumulative. So each day you can see how your clan truly compares to the other clans and decide things like “go for the extra Duel points because we are behind”…or…”we have a comfortable lead, time to target opps’ boats”.

as an fyi, if i implement it, probably will have to stick it inside details if it won’t fit — or maybe I can have it only show on desktop because on mobile, everything is SUPER TIGHT and frankly there aren’t space.

I don’t know what this means.

SML - does this comment make more sense now? This is the unfortunate thing - because Colosseum week is very different than River Race weeks, you’d have to have some kind of conditional logic to switch your formula on Colosseum weeks. Hope it’s not a deal breaker. Thanks for your time.

yes sure — I’m pretty sure that I understood you earlier already. Alpe was the one who’s thinking about something else. I got what you are trying to do after I inserted clan-level vs player-level. 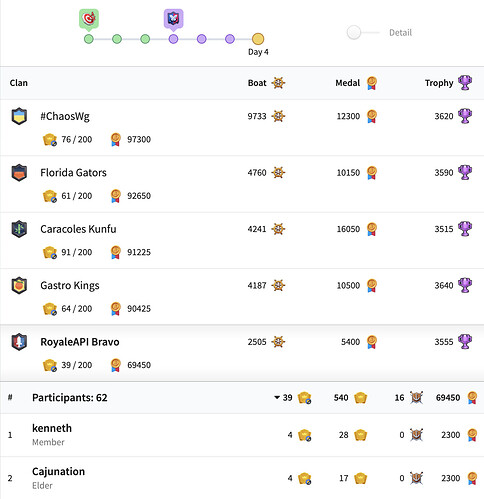 Using the image above as an example, can you tell me all the formula you want to display?

For each value, please list the numbers on the screenshot and put it in a formula.

Thanks so much @SML

It would be Medals divided by Battles. Examples:

Oh, ok, I think I understand now. So this is about daily average score per battle, meaning that it only reflects the average of the current day in the race; and therefore the score of previous days wouldn’t be used. Correct?

Correct. Just a metric that says “how is our clan doing in the river race today”. Since each day awards some boat points based on where you finish, then resets the next day.

In the Clash Royale app, you can easily see the daily medals standings in real time but you can’t easily see how many battles you and your rival clans have played, so total medals is pretty meaningless.

ok. That actually makes sense. I will add something for htis.

And for coliseum, what would you like to see?

Here’s an implementation (live) based on what you suggested: 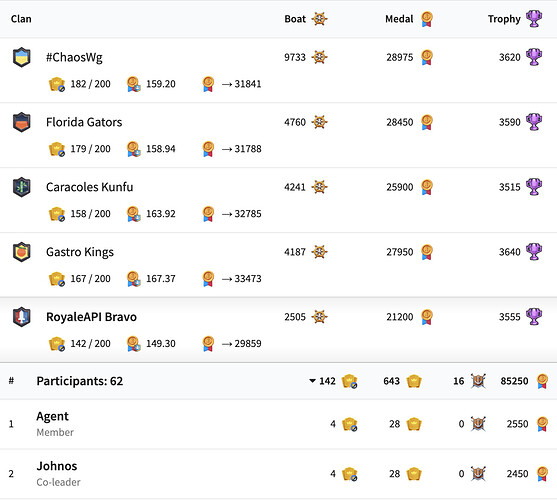 Just saw it - looks great! I informed my clan. Thank you!

For Colosseum, it’s not perfect, but I do the following:

This assumes each clan played 200 battles each day, which we don’t really know, but with the same assumption for all, it still gives you some means of comparison.